Two dazzlingly experimental, dreamlike plays, by one of America’s most adventurous playwrights, which explore the uncomfortable divide between black and white America through the eyes of a young African-American women in a gorgeous, furious burst of poetry, imagery, and sound.

Tickets are $17 and can be purchased online or at the box office.

EARLY BIRD DISCOUNTS: $2 discount on tickets purchased one week or more ahead of show at box office. Early Bird discount is not available online or by phone. Group discounts available only at the Rhynsburger box office, please call (573) 882-PLAY (7529).

I was first introduced to the work of Adrienne Kennedy, the preeminent experimental, avant-garde African-American playwright, by my playwriting teacher at Rutgers University, M.E. Comtois, who had given me Kennedy’s A Lesson in a Dead Language to read.  I was stunned by the play – the stark imagery brought me to my knees. The haunting stage picture of an enormous white dog leading doll-like girls in Latin lessons as their alabaster dresses slowly became drenched in blood was one that would not release me from its grip.
Little did I know at the time, that the playwright, Edward Albee, whose plays would become my life’s work as an MU Theatre scholar, had been Kennedy’s mentor, and had produced Kennedy’s seminal play, Funnyhouse of a Negro with his producing partners, Richard Barr and Clinton Wilder in 1964. I found myself overwhelmed by Kennedy’s work with dreams, which also became a focus in my research in dramatic writing, and I contacted her via email in 2012 to learn more of her work in dreams. We have remained in email contact since then.
At first Ms. Kennedy was quite reticent to communicate, but she eventually revealed a very deep connection to Mr. Albee, and asked me to send to him a lyric, hand-written memoir of her experience working with him on Funnyhouse. It was titled Visited by a Phantom, and she first mailed it to me, and was later published in “The Dramatist”, the journal of the Dramatists Guild.  I later published about Kennedy’s dream work in the Journal of Dramatic Theory and Criticism, but was always haunted by Funnyhouse and in particular by a 1995 production of the play, directed by Joseph Chaikin, the gifted artistic director of the experimental Open Theatre, at the New York Shakespeare Festival’s Public Theater, which was accompanied by Kennedy’s other mesmerizing film image-laden play, A Movie Star Has to Star in Black and White, both produced by Signature Theatre.
I was deeply taken by Chaikin’s brilliant, fluid production – and how the two plays seemed to inform each other. Funnyhouse, which is impenetrably dark, haunting, and utterly mysterious in its awful depiction of the mental collapse of a young black woman, Sarah, seemed to make a new kind of sense when it was followed by Movie Star whose young heroine, Clara, wrestles with bringing her new plays to the stage, even as her brother is comatose in a hospital after an accident, and her marriage is falling apart simultaneous with the collapse of her parents’ marriage. Over the years I have remained in contact with Ms. Kennedy, who at 88, is still writing, and just published her most recent play He Brought Her Heart Back in a Box which premiered in New York in January 2018. Via email, Ms. Kennedy has followed our producing efforts on this historic production of her plays here at Mizzou Theatre, including our casting, design process, and rehearsals. Ms. Kennedy has been instrumental in my work on these two incredible plays. We are so lucky to have her involvement on this production, and I hope that you’ll join me in allowing the powerful humanity of these plays to rush over you, encouraging transformation and change.
David Crespy, PhD
Director

Adrienne Kennedy won more than one OBIE (1964 for Funnyhouse of a Negro, 1996 for Best New American Plays—June and Jean in Concert and Sleep Deprivation Chamber, and in 2008 she received an OBIE for Lifetime Achievement).
The New York Times offered this response to her work: “. . . if nothing much happens according to conventional theatrical tenets, a relatively unknown territory is explored and exposed. Miss Kennedy, herself a Negro, digs unsparingly into Sarah’s aching psyche and . . . into the tortured mind of a Negro who cannot bear the burden of being a Negro and who is too proud to accept the patronage of the white world.” (New York Times, January 15, 1964).
Kennedy says of her work, “I always wrote plays. . . little scenes about what was happening. I basically picked on my family. I saw our house as a stage. When we’d have dinner, I’d go upstairs and write what we said. And then I saw The Glass Menagerie when I was about 15. . . I came home. . . and started to write a play about our family.  I was engrossed by my family” (“Adrienne Kennedy”, by Suzan-Lori Parks, Winter 1996).
Personally, I believe it’s never too late to examine Kennedy’s numerous works. Her stylistic approach is not for the faint of heart and introduces a new view presented by drama, a necessary alternative option to introduce conversation and communication about the history of our United States in order to bridge the gap in understanding from one culture to another: “For the days are past when there are places and characters with connections with themes as in the stories you pick up on the shelves of public libraries. . . .  There is no theme. No statements.  . . . For the statement is the characters and the characters are myself.”  (Adrienne Kennedy, Funnyhouse of a Negro, in Contemporary Black Drama, eds. Clinton F. Oliver and Stephanie Sills (New York:  Charles Scribner’s Sons, 1971), p. 195).
In A Movie Star Has to Star in Black and White, Kennedy shares scenes and stars from glamorous movies from the mid-twentieth century. Deeply enamored with Bette Davis, Marlon Brando, Shelly Winters, Montgomery Clift, and more—Movie Star is captivating and as challenging as Funnyhouse in quite a different way. Enjoy! 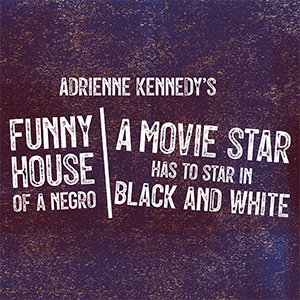