By Elizabeth Robins, an American version, adapted and directed by Cheryl Black

To celebrate the centennial anniversary of the ratification of the nineteenth amendment, MU Theatre presents a commemoration of the ratification of the nineteenth amendment, freely adapted from Elizabeth Robins’s 1906 feminist classic and other historical sources. Our production relocates the action to America, where suffragists marched, preached, wrote, sang, rallied, went to prison and rode horses down Fifth Avenue to win “the free delights of women’s rights!”

MU Theatre box office in the Rhynsburger Theatre lobby from 2-5 pm, Mon. – Fri and one hour before show times. Or by calling 573-882-PLAY (7529) and online at theatre.missouri.edu

EARLY BIRD DISCOUNTS: $2 discount on tickets purchased one week or more ahead of show at box office. Early Bird discount is not available online or by phone. Group discounts available only at the Rhynsburger box office, please call (573) 882-PLAY (7529).

When I was searching for a work that would commemorate the centennial of the ratification of the 19th amendment, I immediately thought of Elizabeth Robins’ 1907 Votes for Women, a “dramatic tract in 3 acts” portraying the suffragette movement in England. My first plan was to “Americanize” Robins’ story, transferring the action from London to Washington DC. The more deeply I delved into the history of America’s suffrage movement, however, the further I strayed from Robins’ tightly focused dramatic script. Our dramatization of American women’s quest for enfranchisement, a quest that intersects with the larger story of securing America’s long-deferred dream of liberty and justice for all, is a complex, sprawling journey beginning in 1776 and never ending.
Tonight’s performance is based on a text more “wrought” than “written,” inspired by Robins’ “dramatic tract” (especially her second act, which depicts a suffrage rally) and assembled from a plethora of historical and dramatic sources, including speeches, letters, sermons, songs, newspaper reports, memoirs, poems, and plays. Creating this work was immensely aided by the degree to which the movement itself relied on theatrical performance to garner attention. Like other disenfranchised groups denied traditional access to power, suffragists engaged in a wide range of carefully choreographed and aestheticized public performances. One can only marvel (and sigh at our inability to re-create) the spectacular parade staged by the National Woman’s Party in Washington DC in 1913, led by a Grecian-garbed young woman on a white charger and featuring twenty-four floats, nine bands, three heralds, four mounted brigades, and 5000 suffragists who marched up Pennsylvania Avenue from the Capitol to the White House with a pit stop on the steps of the U.S. Treasury Building during which 100 women posed in an elaborately costumed allegorical tableau.
The heroines, heroes, and villains of the movement are legion, and I apologize in advance for omitting your favorites among them. Doing full justice to this story in two hours is impossible, but I hope that what you see and hear tonight will inspire further research, study, thought, and action. For American Democracy, which we take for granted at our peril, is a work in progress, and “eternal vigilance is the price of liberty.”
My gratitude to my artistic collaborators—the production team and cast who did not flinch at taking on a project with more locations and characters than the Epic of Gilgamesh—is infinite.
—Cheryl Black
Adaptor and Director

The English word, “Democracy,” is derived from the Greek Demokratika, which combines two words, demos (the people), and kratia (rule/power). So, theoretically, in a democracy, “we the people” hold the power. Throughout America’s history, however, exactly who “we” are and who is actually granted a voice in the democratic processes, has been a source of considerable contention. In Votes for Women we see these relations of power sharply illustrated, particularly how women, including multiply-marginalized women of different races, are situated within the power hierarchy. Votes for Women is about these women, their struggle, and the support they did or did not receive from their peers. In portraying these experiences, Votes for Women resonates with those experiences, invites the audience to step back and consider their roles in these hierarchal practices.
These disenfranchised women perform democracy through resistant practices, such as civil disobedience and disrupting the narratives of power by voicing their own narratives; for example, Sojourner Truth’s famous speech, “Aren’t I a woman?,” delivered at the Ohio Women’s Right’s convention in 1851, and Russian-born anarchist Emma Goldman’s early 20th Century advocacy of free love and opposition to the U.S. involvement in World War I. While Votes for Women’s primary focus is on the suffragist movement of the 19th and 20th centuries, it alludes to (and is allied with) many of the other social activist movements in those eras (most notably, abolition and anti-racist civil rights, temperance, and anti-war movements).
Votes for Women and the stories shared on stage are universal stories of injustice against women. Based on my experience, women in countries with totalitarian regimes, like Iran, are demanding equal rights and marriage reform by practicing similar forms of political activism. Their stories are mostly unheard, but their experience of social and economic oppression resonate with that of the women in Votes for Women. The Votes for Women dramaturgy team invites you to reflect on the global aspects of women’s liberation practices and advocate for all underrepresented and disenfranchised individuals.
—Al Dabiri
Dramaturg 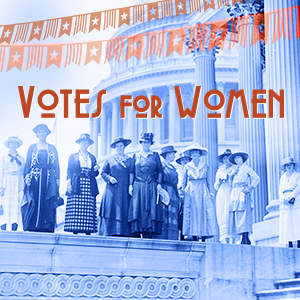