The Interactive Theatre Troupe was founded by Theatre professors Suzanne Burgoyne and Clyde Ruffin in 2003, when MU joined a “cluster” on the Scholarship of Multicultural Teaching and Learning, as part of a multi-campus initiative sponsored by the Carnegie Foundation for the Advancement of Teaching.

Because of positive campus reaction to its performances on diversity, interactive theatre became an integral component of Mizzou’s interdisciplinary Ford Foundation “Difficult Dialogues” program (2006-2010). One of 27 out of 675 applicants nationwide to receive the Ford Foundation “Difficult Dialogues” grant in 2006, and had its grant renewed in 2008.  During the four years of the grant, MU ITT created 4 new scripts, trained 40+ student actors, and gave an average of 25 performances/year.

Since the end of the Ford grant in 2010, The University of Missouri’s Chief Diversity Officer has provided annual ongoing funding for the Difficult Dialogues ITT, was provided by The University of Missouri’s Chief Diversity Officer, and now by the Division of Inclusion, Diversity, and Equity. This funding supports some 16 performances/year requested by faculty for their classes, as well as sessions for such venues as MU’s chapter of the NAACP, Black History Month, the Diversity Summit, MU’S $1 million NSF GK-12 “Show Me Nature” grant program, etc.

In 2011, at the request of the facilitators for Mizzou Advantage Education and Food for the Future initiatives, ITT worked with a faculty member from Journalism and an Undergraduate Research Team during 2011/2012 to create a piece on media’s impact on body image and nutritional choices.

In 2011, our interdisciplinary team received a $67,000 grant from the Susan G. Komen Foundation of Mid-Missouri to develop a pilot project:  interactive theatre dealing with doctor-patient communication about breast cancer. Dr. Heather Carver, Associate Professor of Theatre and a breast cancer survivor, conducted ethnographic research with focus groups and wrote 3 short scripts.  Dr. Burgoyne workshopped the scripts with actors.  Dr. James Campbell, Professor of Family and Community Medicine, served as PI on the grant and medical consultant.  During 2011/2012, ITT gave 8 performances for over 400 participants, including students in medicine, nursing, and social work, as well as patient survivors and practicing health professionals.

As a result of the pilot, the network expanded to include Professor Jane Armer, Director of Nursing Research at Ellis Fischel Cancer Center and a nationally-respected researcher of breast cancer and lymphedema. One of her advisees, Pam Ostby, a doctoral student in Nursing, wrote her dissertation on the use of interactive theatre for patients.  In fall 2012, the project and its expanded network of researchers received a $25,000 grant from Mizzou Advantage.

In 2015, the Interactive Theatre Troupe became part of the MU Center for Applied Theatre and Drama Research. And in 2016/2017 the Sinclair School of Nursing funded the development of two scripts on Health Equity. 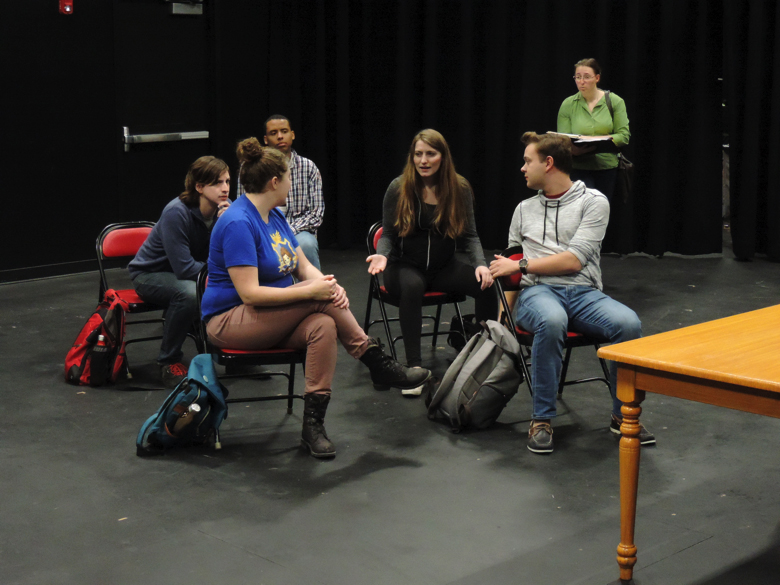 As part of the Interactive Theatre Troupe’s Difficult Dialogues series, a group of students discusses the ethnicity of a new faculty hire, in “Identity Politics.” Ideas about his race, heritage, and language come into question as they debate his ethnic identity. 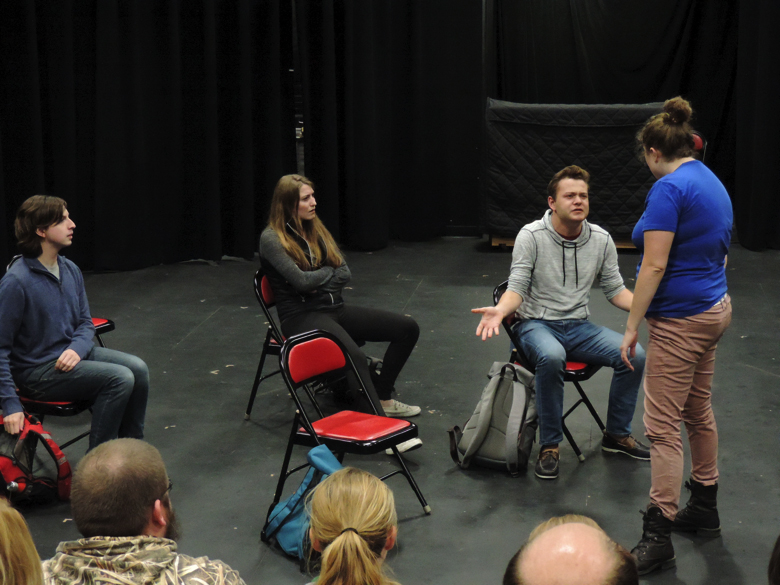 Things get heated as the students argue about what affirmative action is, and how legitimately the new professor got his position. One student, uncomfortable with the entire situation, leaves the classroom. None of the students really know how to discuss the topic, and it descends into a shouting match. 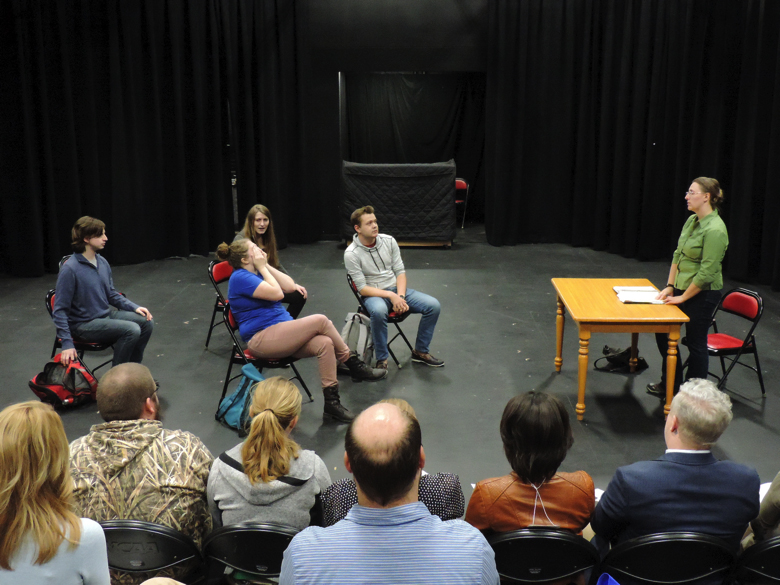 The professor of the class tries to seize the reins of her frustrated class, by focusing their attention on the day’s lesson plan. The students are frustrated, as they neither came to a conclusion on the debated topics, nor was their professor willing to help them sort through the difficult conversation. It could easily be assumed that there is a better way of dealing with such a situation. 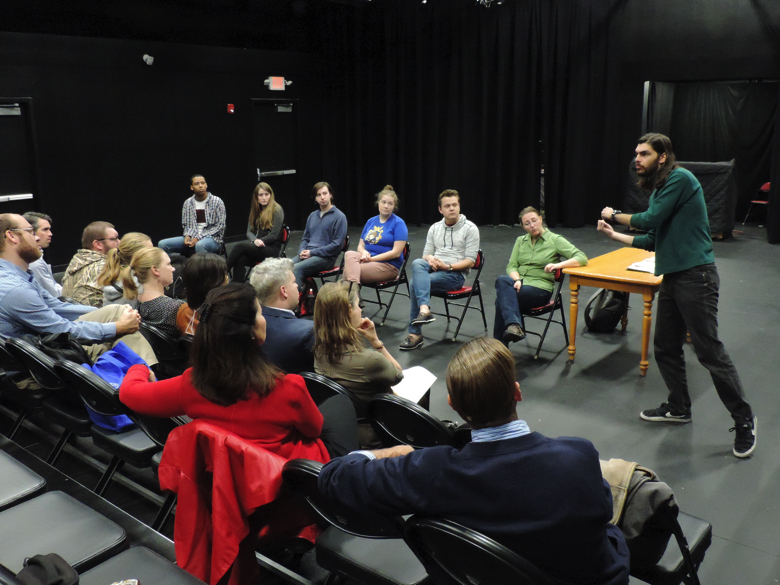 The facilitator for this Interactive Theatre performance begins moderating a discussion between the actors, as their characters, and the audience. The facilitator attempts to draw out the difficulties seen in the previous scene to both inform the audience of the issue, and the various viewpoints of the characters. Audience members get to interrogate the character’s reasons for how they behaved. 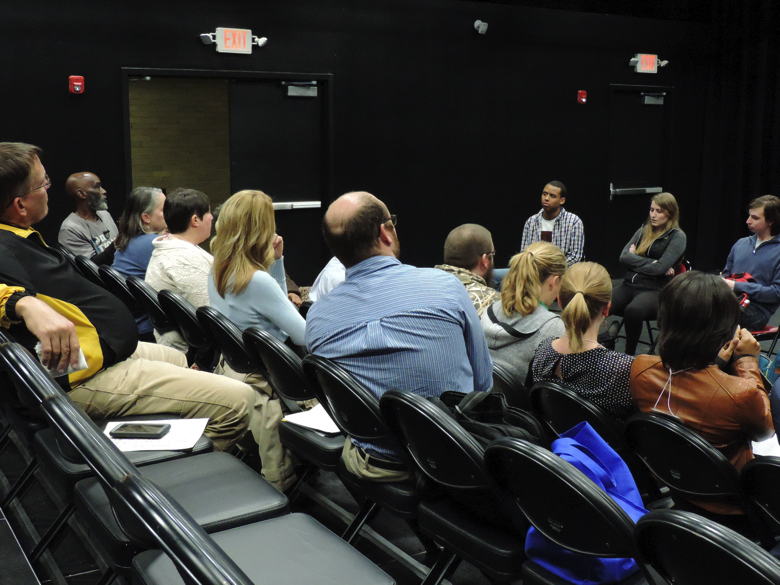 Following the talk back between the characters and audience, the audience learns about the next step that they’re expected to take with the actors: intervening. The scene starts over from the beginning, and at any point an audience member is able to shout “Stop!” and enter the scene to try to fix it. The only question remaining is how successful the interventions are. 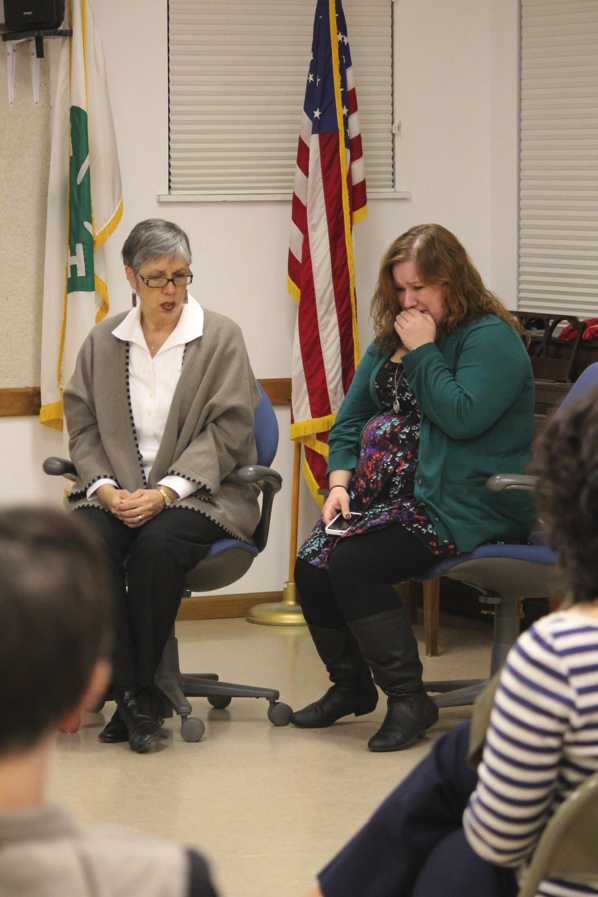 The Komen scripts were developed for an audience of medical students, with funding from the Mid-Missouri Komen Foundation. Komen performances explored doctor-patient communication about breast cancer, based on research in which focus group participants told real-life stories about how their doctors mishandled their diagnosis. Three different short scripts show how healthcare professionals might be unaware of how they behave towards their patients.  In this scene, A patient’s niece begins to cry, fearing what the diagnosis of cancer means as the next step in her aunt’s life. Abrupt and technical in delivering the diagnosis, the doctor forgot to consider the human side of his patients and their caregivers. 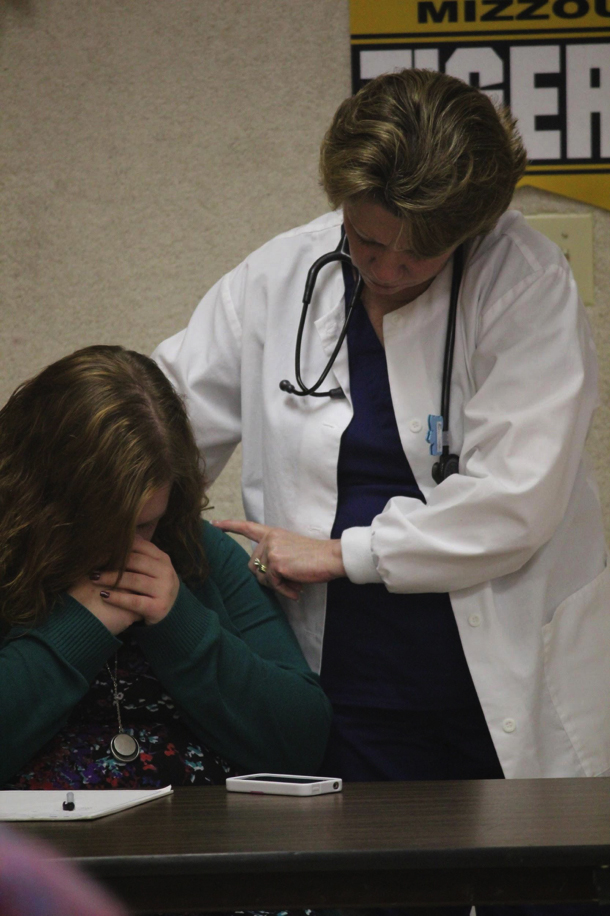 Here, a nurse consoles the niece of the patient who has just been diagnosed with breast cancer in an overtly blunt manner.  The doctor’s goal was to make sure the patient took his treatment instructions seriously, but his means of pursuing the goal lacked sensitivity. 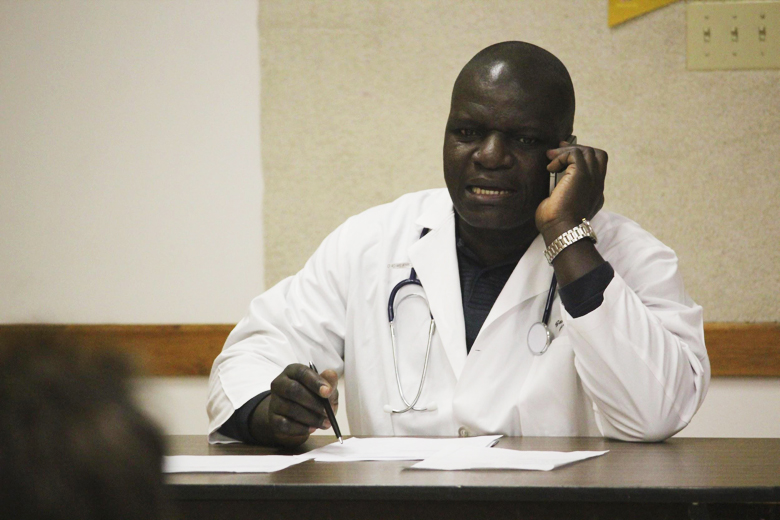 A Kenyan doctor telephones a patient who recently came in for a cancer screening. The sketch shows why calling a patient at work to announce her diagnosis can devastate the patient. It also reveals that physicians from other countries may be looked down upon by colleagues and patients. 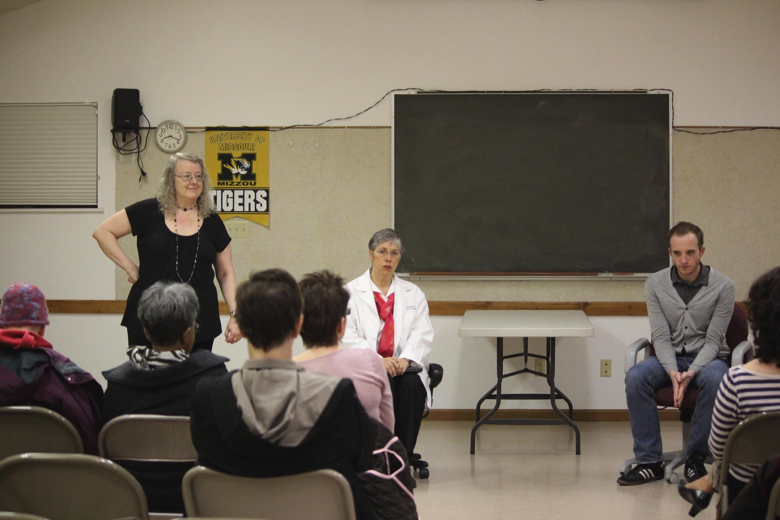 Following the performance, the facilitator begins moderating the “talk-back,” in which the actors (still playing their characters) answer audience questions about the scene they’ve just witnessed. The “spect-actors” gain insight into the situation by learning more about the characters’ background and their intentions.  After the talk-back, the scene is played a second time. “Spect-actors” are invited to say “Stop!” and come onstage one at a time to do an “intervention,” trying out their own ideas for solving the problem.

In the talk-back for this scene, “Tea and Crumpets,” a young married couple is struggling with the impact of the wife’s double mastectomy on their relationship, as well as the doctor’s emotional reaction to just having another of her patients “crash.” 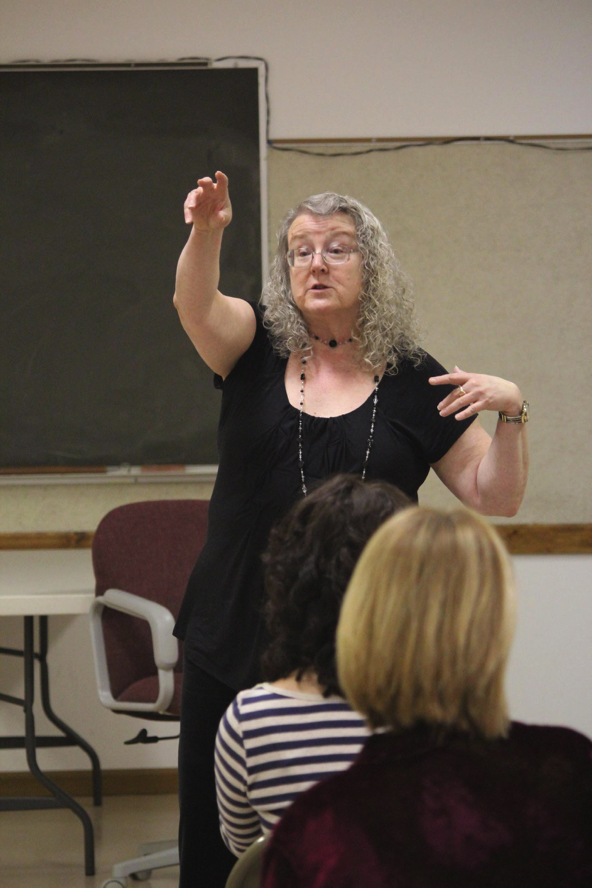 Dr. Burgoyne calls upon an audience member with raised hand to ask a question in the talk-back.