A Comedy, a Quartet, a Revolutionary Dream Fugue, a True Story
MU Theatre
The Revolutionists program

The Revolutionists by Lauren Gunderson
A Comedy, a Quartet, a Revolutionary Dream Fugue, a True Story

Post-Performance Conversations
On Friday and Saturday night, join us for a post-performance conversation about the play’s history and production, featuring the following campus voices:

Director’s Notes
While rehearsing for this production of The Revolutionists, Judge Ketanji Brown Jackson was confirmed to the US Supreme Court. As the first Black woman to serve on our nation’s highest court, Justice Jackson noted in her confirmation speech: “It has taken 232 years and 115 prior appointments for a Black woman to be selected to serve on the Supreme Court of the United States.” Justice Jackson’s words remind us that her participation in Western democracy—a social project committed to “liberty for all”—is revolutionary.

Lauren Gunderson’s play, The Revolutionists, takes audience members into a key event in Western democratic history, the French Revolution. Set in Paris during the Revolution’s Reign of Terror in 1793, the play features four female revolutionaries: playwright Olympe de Gouges, Haitian rebel Marianne Angelle, assassin Charlotte Corday, and former Queen of France Marie Antoinette. The play’s full title, The Revolutionists: A Comedy, a Quartet, a Revolutionary Dream Fugue, a True Story, reveals that the story is rooted in reality and imagination. Olympe de Gouges, Charlotte Corday, and Marie Antoinette were real participants in the French Revolution, just as women like Marianne Angelle really did shape the Haitian Revolution. But, Gunderson’s play is also a hypothetical “what if.” What if female revolutionaries of varying cultural backgrounds could have come together in sororité to think, argue, and imagine a different version of liberté?

Liberation, of course, is imagined differently by different people in different contexts. In the play, Marianne envisions liberation for the enslaved people of Saint-Domingue (today’s Haiti), while Olympe focuses on female citizenship in the new French Republic. Though neither Marianne’s nor Olympe’s imagined goal occurs in the play, their revolutionary ideas endured. The people of Haiti won their independence from France in 1804, and French women won the right to vote in 1944. To imagine is to consider the world otherwise. And from the imaginations of revolutionaries—be they the characters in this play, or girls imagining themselves in roles like supreme court justices—new worlds begin.

Dramaturg’s Notes
The history of the French Revolution for me starts with a cube of sugar. As a Nigerian who is studying theatre in the US, experiencing other histories always fascinates me. And as I basked in all that French history had to offer, something went off when I read about the French-run sugar mills and plantations in Saint-Domingue– today’s Haiti. Suddenly, it all began to make sense. I grew up on St. Louis sugar cubes and apparently, these sugars were (are) imported into Nigeria from France. France in turn, was a major supplier of the sugar it got from its colony, Saint-Domingue. However, while France was supplying the world with sugar, running various colonies and slave labor camps, they were fighting a revolution back at home that intensified by 1793.

Lauren Gunderson situates this play, The Revolutionists, at the peak of the Reign of Terror: where we meet these amazing women at various stages as they struggle to make impacts while staying alive. The Revolutionists highlights the voices of women who have been silenced or misunderstood by history. As much as this play is historic, it also gives room for us to draw on the similarities between 1793 and our present day. As we watch the women live in a world with intense distrust in government, street violence, huge wage gaps (the Estate System), racism (slavery) and sexism, which part of our contemporary world is reflected back? These brave revolutionists have chosen to tackle at least one part of this dysfunction. And if we lived in 1793, which issues would we have taken on?

As you experience The Revolutionists, I encourage you to consider how you show up in this “historically-current” piece. A good place to start might be the creation story of our great state, Missouri, and its purchase from France in the Louisiana Purchase of 1803. Or simply understanding the imagery of the St. Louis flag as it details the state’s relationship to Spain and France. Some of this information I have curated in the lobby to support your experience. However, if you want more access, take a glance at the exclusive website I built for our amazing cast and crew below. Ultimately, I encourage you to indulge your curiosities and feed them! 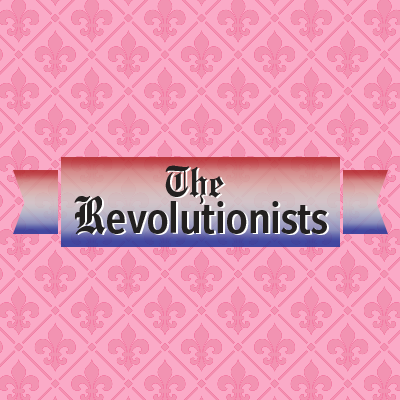